The DOW JONES INDUSTRIAL index returned to the upside during its recent trading at the intraday levels, To achieve gains in its last sessions, by 1.37%, to add the index to it about 436.05 points, to settle at the end of trading at the level of 32,197.60, after falling slightly during trading on Tuesday, by -0.71%.

Yesterday, the US Federal Reserve’s policy-setting committee decided to raise the federal funds rate by 75 basis points to a range of 2.25% to 2.5%, in line with expectations.

Federal Reserve Chairman Jerome Powell said Wednesday at a news conference after the FOMC meeting that the incoming data will determine whether another “extraordinarily large” increase such as 75 basis points is needed at the upcoming FOMC meeting on 20- September 21, but it cannot be ruled out.

In other economic news, the advanced goods trade deficit narrowed to $98.18 billion in June from $104.04 billion in May, reflecting a sharp rise in exports and a slight decline in imports.

The National Association of Realtors’ pending home sales index fell 8.6% in June, well below expectations for a slight increase. Pending sales are down 20% from the previous year.

Technically, the index benefited from positive support due to its trading above its simple moving average for the previous 50 days, settling above the support level 31,885, in light of the dominance of the short-term corrective bearish trend along a slope line, as shown in the attached chart for a (daily) period, with the start of Negative signs appeared on the relative strength indicators, after they reached overbought areas. 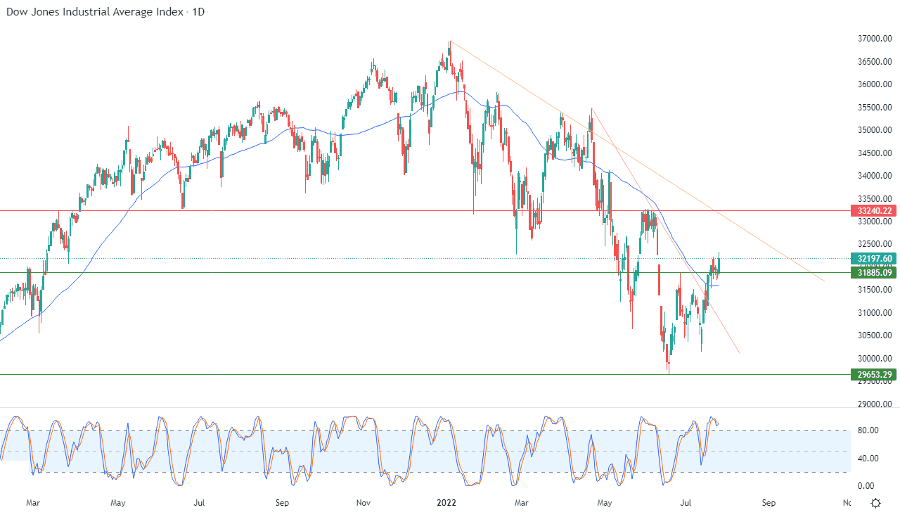 The chart was generated by . platform TradingView

Therefore, our expectations continue for more cautious ascent for the index during its upcoming trading, as long as it remains stable above 31,885, to target the main resistance level 33,000.